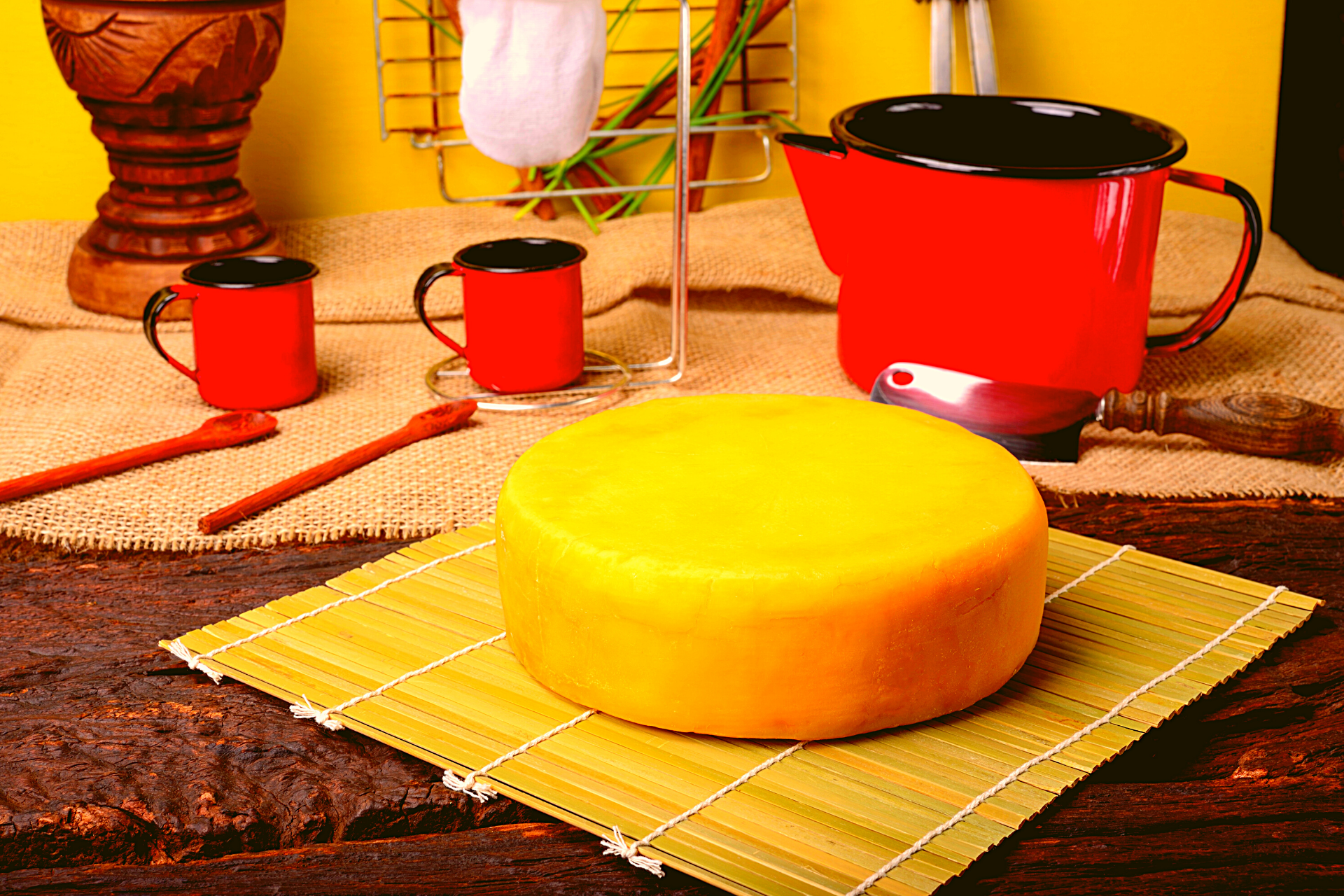 Coffee has been the subject of many taste experimentations with people adding various things to coffee just to make it taste better, some different.

The most common things added to coffee are sugar and milk. The slightly more uncommon coffee addition is butter. Although bulletproof coffee is not gaining popularity.

But the weirdest and even more obscure combination is cheese in coffee.

Cheese in Coffee: What Is It And How It Taste?

Cheese in coffee also called kaffeost originated from Sweden and is quite popular there. However, in the past few years, it is beginning to surge stateside and around the world.

Kaffeost was first documented on the internet on the Atlas Obscura, talking about its Scandinavian origins.

Traditionally, cheese in coffee is made with cheese from reindeer milk. Today, however, goat’s milk or cow’s milk is now used. The cheese that is used here is also known as cheese bread or bread cheese since the feel and texture of the cheese is somewhat bready that cheesy.

Black coffee is poured into the wooden mug that is made of birchwood. Inside the mug, there are cubes of cheese. So, as you pour the coffee over the cheese, it starts to absorb the coffee like a spongy bread would.

You can either pick off the cheese as you would with marshmallows from hot choco or drink the whole coffee and eat the cheese later. Each bite exploding with a cheesy coffee flavor note. Read Here: Top 10 Best Espresso Coffee Beans

Not only that, the cheese also become spongy and nice once it absorbs the coffee, giving you a unique texture in your mouth. You need to have it while it is hot, though, if you want to have a taste the unique flavor profile of both coffee and cheese.

If you haven’t given cheese in coffee a shot, then you should definitely try it.

But wait, how do you make a bread cheese for your coffee?

Bread cheese is remarkably easy to make and you can easily try one at home.

Note: A cooking thermometer can be very useful as well as a cheesecloth. If you don’t have cheesecloth, then you can use a clean handkerchief or a piece of cotton fabric.

Take note: If you want the cheese to have a bubbly and spongy texture, then you will need to bake it. Place the cheese into an oven-proof dish and put it in your oven.

Set the temperature to 350 degrees Fahrenheit and cook until it is golden. You should now have a bread cheese. Cut it up into small cubes and put them in your favorite mug.

Then pour some black coffee over it and enjoy as the cheesy and coffee notes combine.

Maroilles: The French Version of Cheese in Coffee

In the northern areas of France, the industrial and coal communities were used to dipping their cheese in coffee. Once exclusive to the North of France, the soldiers started exchanging recipes when communicating during the World War II and has not become popular even in Paris.

Although smelly that it is usually double wrapped to prevent its smelliness from going out, maroilles is often paired or dunked into coffee.

You can take a bite on maroilles then a sip of the coffee. Or just dunk it into the coffee itself and take a bite. The cheese will absorb lots of coffee and you will end up with a smooth and flavorful bite.

Other Types of Cheese Coffee

Other than the Scandinavian cheese in coffee origin, there are other forms of cheese coffee you might want to try.

One form of cheese in coffee that is really popular in the US today is made by Percolate, a coffee house in Los Angles, California. Their version of cheese coffee is inspired from their cheese tea.

Called the Bittersweet Tiramisu, these cheese in coffee is basically a cold brew coffee topped with a mixture of whipped heavy cream and sweetened cream cheese.

Another form of cheese in coffee is from Vietnam. This original recipe is coffee served with a whipped mixture of cheese and eggs. The coffee shop owner got the idea during a time of shortage of milk. Read Here: Top 10 Best Espresso Machines Under $1000

And even though the exact preparation is a secret, the ingredients include butter, egg yolk, condensed milk, coffee powder and cheese. This kind of Vietnamese coffee is more commonly known as egg coffee.

Now that you know about other forms of cheese in coffee, we would be remiss if we did not tell you about another way to have both cheese and coffee.

The more modern cheese coffee is actually pairing different varieties of cheese with coffee. With this method, you don’t necessarily dunk the cheese in coffee. Rather, you have a bite of the cheese and taking a sip of coffee right on top of that.

Cheese and coffee pairings open up avenues for lots of different flavor combinations which other people would not have otherwise been inclined to try.

Sweeter cheeses usually go well with most coffee since the flavors can balance themselves out.

Best Cheese To Pair With Coffee

Here are some of the best cheeses to pair with your favorite cup of coffee.

What better cheese to pair with your freshly brewed coffee than one that’s already coated in coffee grounds?

Beehive Cheese Co. formulated the Barely Buzzed cheese that has a rind coated with lavender and coffee grounds. The lavender buds give off that faint floral flavor which surprisingly tastes with the coffee flavor and cheddar-like cheese.

In addition, the coffee covering its rind is ground into a fine velvety texture that makes it pleasantly and completely edible.

One of the cheeses that is almost like cream, Ricotta has this sweet flavor. So, pairing it with coffee is like putting a scoop of cream in your coffee.

The creamy and smooth texture will dance in your mouth against the strong coffee flavors.

When you pair Gouda with coffee, go with the more aged ones. Aged gouda offers a caramelized sweet flavor that can stand up and smoothen even the strongest cup of coffee.

It is almost like pairing a salty and sweet caramel candy with coffee. Gouda ages anywhere from 2 months – 5 years.

An Italian cheese that carries the taste of its distant relative Parmigiano-Reggiano. This cheese offers a nutty, slightly fruity, and sweet flavor.

Aged for at least a year, its texture becomes slightly smoother and softer than the Parmigiano-Reggiano cheese with stronger flavors that complement with that of coffee.

A Norwegian cheese, gjetost not only looks like a giant slab of caramel toffee but also has the very sweet cheese flavor that tastes a lot like caramel.

It is made by gradually heating milk until the sugars turn brown and caramelize. Serving this sweet cheese with coffee is like serving dessert with coffee. It is one of the most natural pairings ever!

Known for its sharp taste, cheddar perfectly complements the pleasing bitter flavor of coffee as well as espresso. It also has some nutty characteristics which can further enhance the pairing.

Like gouda, this cheese is also aged for varying time period, so the more you age it, the more the flavors develop.

The semi-hard goat’s milk cheese is dotted with the fenugreek seed bring flavor hints of maple and butterscotch. The sweet and salty combinations of fenugreek and goat cheese is already a perfect combination, but further enhances the flavor of coffee.

The fenugreek plant is also known for its slightly sweet seeds that can be used in spice blends, coffee, and tea.

How To Pair Cheese and Coffee

Yes, that cheese tastes like cheese. But what other flavors are you taking?

These secondary flavors are what make each food items unique. Thus, you need to train your taste buds in order to pair properly.

Is there a green, asparagus kind of flavor going on?

What about certain umami or sort of flavor note?

These pieces of information should give you a clue to what pairing will be the most successful.

The easiest way to describe the body is thinking about the difference between drinking skim milk and cream.

The cream coats your mouth and lingering for some time. This is what considered to be full-bodied. Meanwhile, skim milk is not as viscous and does not hang around your mouth after swallowing it.

Due to that lightness, it is considered light bodied. Both cheeses and coffees have body. So, consider that body and mouthfeel.

This is a personal level. What tastes good for you probably won’t taste great for me.

To properly create a cheese and coffee pairing will depend on the tasting notes you want and prefer.

With coffee, there is no right or wrong way to enjoy it. And you can add with anything that tickles your fancy. Also, with the creative taste buds of people, coffee opens up avenues for new culinary adventures like cheese in coffee.

Have you tried coffee in cheese yet? Share your experience through the comment section below! And please don’t forget to share this article with your friends and family!

Have a cheesy, caffeinated day!

Why Does My Coffee Taste Sour? How To Fix it

Coffee Tastes Bad? Why and How To Fix it