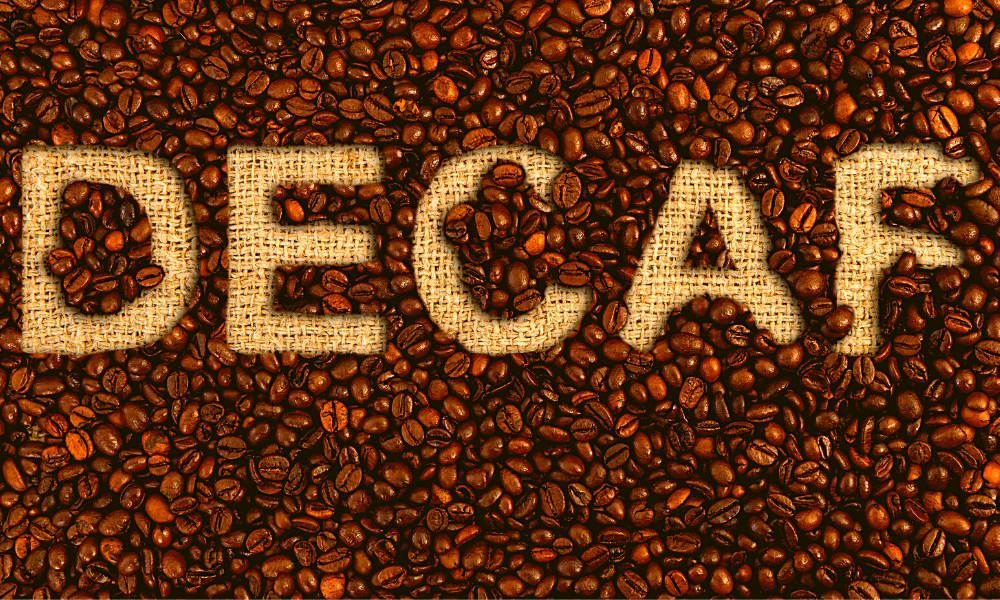 Without a doubt, one of the most popular drinks in the world is coffee. Aside from its flavor, many people prefer to drink coffee because of its caffeine content.

What’s more, the level of tolerance may differ from one person to another. For example, a person can drink three cups of coffee every day while another one may have a hard time finishing one cup. Read Here: Top 10 Best Decaf Coffees

If you want to drink coffee but don’t want the caffeine content of regular coffee, then you may want to drink decaffeinated coffee.

But what exactly a decaf coffee is and is it a good idea to replace regular coffee? Would you like to know the answer? If yes, then check out this article for more information. 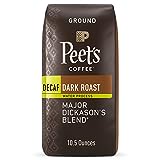 What Is Decaf Coffee?

Short for decaffeinated coffee, decaf is coffee from beans that had at least 97 percent of their caffeine eliminated.

In the actual fact, there are many different ways to get rid of caffeine from coffee beans, for example, carbon dioxide, water, or organic solvents.

Before they are ground and roasted, the coffee beans are decaffeinated. Aside from the caffeine content, the nutritional value of decaf should be almost the same with a regular coffee.

But the smell, as well as taste, may become a little milder, whereas the color may change based on the method used.

As a matter of fact, this makes decaffeinated coffee more pleasing most especially to those who are sensitive to the bitter smell and taste of regular coffee.

Decaffeinated coffee, however, is NOT completely free of caffeine. In fact, it consists of differing amounts of caffeine typically about 3mg for every cup.

Thus, even though decaf is not completely free of caffeine, the caffeine content is typically small.

How to Make Decaffeinated Coffee

Listed below is the step-by-step process on how to make decaffeinated coffee.

Is It A Good Idea to Replace Regular Coffee?

Both decaf and regular coffee are considered healthy drinks. If you’re wondering whether replacing a regular coffee is a good idea or not, honestly it completely fine.

Decaffeinated coffee could be a great alternative for regular coffee in some cases. But the final decision will depend on you. However, if you’re having a hard time deciding then read on to find out the benefits of drinking decaffeinated coffee.

What Are the Benefits of Decaffeinated Coffee?

Decaffeinated coffee is actually good for you especially if you are drinking it on a regular basis. As a matter of fact, it is associated with various health benefits that regular coffee cannot offer.

1) Reduce the Risks of NeurodegenerativeDiseases and Aging

This kind of coffee is associate with preventing aging as well as neurodegenerative diseases like Parkinson’s and Alzheimer’s.

Decaf has a similar protective effect on the neurons of the brain that is why it is capable of preventing the onset of neurodegenerative diseases.

One study suggests that the main reason for this is the present chlorogenic acid in coffee instead of caffeine that is in control of this effect.

Another great benefit of decaffeinated coffee is its positive effect on the endothelial function which is important to cardiovascular health as it helps in the modulating blood flow vasodilation as well as vasoconstriction, offering the right amount of nutrient-rich blood and oxygen throughout the body.

Keep in mind that a dysfunction in the endothelial tissue may result in an increased risk of heart diseases.

Decaffeinated coffee also has an effect on psychomotor behavior as well as brain cognition. A study experimented on aged rated supplemented with 0.55% of the coffee-penetrating diet. In fact, this is equivalent to ten cups of coffee daily.

Researchers uncovered that rats consumed the 0.55% of coffee-rich diet shown better performance when it comes to working memory tasks and psychomotor testing compared to those who consumed the control diet.

However, the benefits of caffeine didn’t necessarily account for the improved performance in the diet that is rich in coffee. This is in part because of the beneficial bioactive polyphenols in the decaf coffee.

4) It Will Protect the Liver

One study also showcases the hepatoprotective advantages that decaffeinated coffee has, no matter what is the caffeine content.

According to researchers, coffee diterpenes and many different oils like kahweol and cafestol seem to promise protective effects against a particular toxic called aflatoxin.

Take note, this will affect your harm negatively. Both the kahweol and cafestol oils encourage the creation of glutathione, a powerful antioxidant that will improve the liver function. What’s more, it will boost the detoxification pathways in your body.

Drinking decaf may reduce your risk for developing type-2 diabetes, it is a condition where your pancreas does not offer sufficient insulin or the cells do not respond to the hormone insulin.

In the actual fact, type-2 diabetes may increase your risk for other health issues such as heart disease, kidney dysfunction, and chronic inflammation.

Scientists at the University of Sydney in Australia reviewed the literature about the effects of consuming coffee on the risk of type-2 diabetes.

They found that subjects ingesting a higher intake of decaf will lower the risk of for type-2 diabetes than non-drinkers.

Drinking decaffeinated coffee has been associated with a small yet considerable reduction in the risks of premature death and even death from heart disease or stroke.

7) Reduce the Risk of Developing Gout

Gout inflammatory arthritis caused a buildup of uric acid in joints. Even though it happens in both males and females, gout is common in men. Read More: Top 10 Best Decaf Coffees

One study reported that men drinking four or more cups of decaffeinated coffee every day lowered the risk of developing this inflammatory arthritis to those who are not drinking decaf.

If you want to shed some of your pounds but don’t want to completely remove coffee from your diet, then decaf can be a great alternative.

But much like the regular coffee decaffeinated coffee may affect your weight loss program if you are considering additives like sugar or cream.

Decaffeinated coffee has a minimal amount of caffeine of which 97 percent is removed from the coffee beans.

However, some decaffeinated coffee might still have traces of caffeine, thus you will be able to enjoy the weight loss benefits that are connected to caffeine.

Decaf, on the other hand, has no calories in an eight-ounce service, thus drinking it may help in building up calorie deficit over time that may lead to weight loss sooner or later.

Drinking a cup of decaf every day for five days a week for one year may result in almost 8lbs. of body weight lost.

Is Decaf Safe for Pregnant Women?

Caffeine particularly regular coffee is not recommended for pregnant women. American Pregnancy Association tells that caffeine can reduce fertility in animals. So, if you are pregnant, it is a wise idea to reduce your caffeine intake.

You might not need to cut down your caffeine intake completely, however, there should always be a limitation.

According to research done by the San Joaquin Valley in California, decaffeinated coffee is not dangerous to mothers and most importantly, doesn’t hinder fetal growth during pregnancy. But if you want to ensure safety, it is best that you ask your physician first.

Who Should Drink Decaffeinated Coffee?

When it comes to who can drink decaffeinated coffee, still, it will boil down to preference, however, the main factor here is tolerance. For those who cannot tolerate a cup of regular coffee but want to enjoy its flavor, decaffeinated coffee is perfect for you.

For health purposes, usually, decaf is recommended to people who are more susceptible to nervousness and anxiety since caffeine comes with anxiogenic effects. Meaning to say, the caffeine can aggravate anxiety and restlessness at any given time.

On the other hand, decaf coffee is recommended to individuals who really want to quit their addiction to caffeine. As a matter of fact, this type of coffee offers the same taste and aroma that regular coffee can offer, but with removed or laser caffeine.

How Much of Decaf Can You Take?

But this doesn’t mean that you will need to drink 5-10 cups of decaffeinated coffee every day. However, if you want to stay on the safe side, stick two to three cups.

What Are the Possible Side Effects of Decaffeinated Coffee?

Much like other coffee, decaf also comes with a number of side effects most especially when used incorrectly. For you to have an idea about the possible side effects we have listed them below.

High acidity levels in decaf coffee may result in high cortisol levels, mineral loss, gastrointestinal disease, and osteoporosis. With that in mind. It is best not to consume too much.

This acidity is due to the kind of bean utilized in decaf, known as the Robusta. Unlike other beans, Robusta comes with the highest content of caffeine as well as a higher level of acidity.

In the process of decaffeination, only the caffeine is removed or reduced. The levels of acidity remain unchanged.

Consumption of decaffeinated coffers was associated with increased risks of rheumatoid arthritis. The underlying cause behind this can be the preparation as well as the processing of decaf undergoes.

3) May Interfere with the Absorption of Iron

In general, coffee gas chlorogenic acid, and so does decaf. In case you didn’t know, this acid was found to inhibit plant-based (nonheme) iron absorption.

4) It May Cause Drowsiness and Headache

Such side effects can be more of withdrawal warning signs. Those who are consuming coffee on a regular basis often experience drowsiness, headaches, and fatigue given decaffeinated coffee.

Another concern may be the usage of methylene chloride in the process of decaffeination. According to some research, the chemical will slow down the central nervous system temporarily resulting in nausea, headache, and drowsiness.

5) Decaf May Possibly Cause Heart Complications

Decaf may increase the levels of LDL cholesterol or bad cholesterol. Such effects weren’t seen in caffeinated variants. Decaffeinated coffee was seen to increase a certain blood fat that is associated with metabolic syndrome.

Though decay by itself might not be dangerous, the chemicals used in the process could be. The above-mentioned side effects should not stop you from using decaf. It is because the benefits it can offer cannot be underestimated.

Decaf coffee has its benefits and purposes that make it totally different from regular coffee. Aside from the preparations as well as processes involved, a decaffeinated offer is still a coffee when you think really hard about it.

However, if you wish to drink a cup of coffee for its stimulating effect, then regular coffee is perfect for you. But if you are used to drinking a cup of coffee before going to bed or after dinner, then decaffeinated coffee is the best option.

In addition to that, if your caffeine tolerance is very low and you want to enjoy the flavor and aroma of the coffee, you can never go wrong with decaf coffee.

Is Espresso Good for You? Facts You Probably Didn’t Know (Until...